What Does Craft Beer Mean to US?

When we opened our first store, just over nine years ago, we very much defined ourselves by the Brewer's Association definition of a craft brewer. At the time this seemed appropriate, though it's worth noting that the BA is a trade organization, intent on defining a brewer, not a craft beer retail bottle shop or tap room. As we grew and watched the very small industry around us grow, we realized that it was time we figured out who the heck we were.

Much of 2014 was spent hammering out our mission (and trinity): amazing beer, hospitality, and education! The first four years of our business, we didn't buy or sell beer that was brewed by those breweries that controlled the majority of the beer brewed in the world, breweries like AB-InBev, MillerCoors, and Gambrinus. Later that same year we made a decision to stop dividing ourselves from others, by what beer we bought and sold. We actually wanted to stop keeping score and let what was at our core be the shining star in our stores: really amazing beer!

So craft beer, to us, is incredible beer. It's that simple!

And no, you will not find macro-brewed beer, wine, cider, sake and liquor at Craft Beer Cellar, but don't be suprised if we carry or support a damned good beer that doesn't exactly have craft or artisanal ownership.

Who is Craft Beer Cellar?

We are a craft beer bottle shop, whose primary focus has always been the best beer that we can get our hands on. We spend our lives in search of beers made in breweries just down the street or on the other side of the world, that are well-crafted and good examples of either their style or what we think excellent beer should be, keeping in mind that "style" is not everything. We are not snobs, we are beer geeks! We are students of our trade and take great pride in learning everything we can about beer; how it's made, what the ingredients are, what we should drink it from, and what food a beer pairs well or can be made with. We like to tinker with draft systems, tap faucets and kegs, and have been known to brew some pretty ridiculous beer, ourselves.  We are your local good beer bottle shop and in many states, tap room, for on-premise draft service or sip-n-shop; craft beer isn’t just a section of the store for us! Many of our stores offer limited food service, as well as an extensive selection of books, glassware, homebrew supplies and other related merchandise.

As our industry has grown and changed so quickly in the past few years, around beer laws, distribution, brewing, and brewery tap rooms, with own-and-off premise sales, we've had to tweak our product sets, too. Some Craft Beer Cellar locations have stewarded larger wine sections and helped us understand and explore how this will become a more important aspect of what Craft Beer Cellar does. So far, we've enjoyed learning so much about grapes and tiny producers, blenders and vineyards across the globe. We've experimented with Biodynamic Wines and look forward to pulling together a company-wide wine philosophy and porfolio that we all can be proud of.

All beer geeks in all of our stores are Apprentice Beercierge or Cicerone® Certified Beer Servers. Store Owners are Certified Cicerone® and Certified Beercierge, by Craft Beer Cellar standard; many go on to obtain higher certifications. Rest assured that we have studied & researched every single beer in our stores, before we made a decision to put it on the shelf.

Our customers are the reason we exist and you should expect to be treated like you are important to us! We carry boxes to cars, make great eye contact, genuinely care how your day is going, and are not afraid to own our mistakes, if we screw something up. In addition to amazing beer and education, it is our goal to ensure you always have an unbelievable experience at any Craft Beer Cellar!

And yes, call us a Franchise if you like, because that’s what we are. But we are also a crew of independently owned Craft Beer Cellar stores. We are committed to driving the growth and awareness of craft beer (and other products) through hospitality, education and the exceptional products we choose to carry.

Craft Beer Cellar Grand Rapids is centrally located in the Heartside neighborhood in downtown Grand Rapids offering both a bottle shop of packaged beer of over 800 craft beers and a full bar with 20 taps. We are in the historic Klingman Furniture building where exposed brick and old growth timbers frame a warm and inviting space to hang out with friends and family. Across the street from us is the Grand Rapids Downtown market, which houses food stalls and restaurants. Since we are BYOFood, we encourage you to grab something to go from the market and bring it back to our place to pair with your favorite beer. There is ample street parking, which is free after 5pm and on weekends, plus two paid lots with affordable rates. The Downtown Market's lot is free for the first 30 minutes, making it a great spot to park if you're stopping in for a quick 6-pack to go.

Jessica is a Michigan-native, born and raised in Kalamazoo. Love of arts led her to move to Boston to pursue a degree from the School of the Museum of Fine Arts. After graduating, she decided to stay for a bit, which ended up being ten years. Jessica worked a number of different jobs that allowed her to build a variety of skill sets, essentially becoming a “Jack (or Jess) of all trades”. Organization, logistics, and creative problem solving are her cups of tea.

During her time in Boston, she met and fell in love with Brian ... and craft beer. In 2016, Jessica and Brian found themselves at a crossroads and decided to take a leap and make a change in their life. Apparently not content to make small changes, they decided to change careers, learn a totally new business, and uproot their life and cats some 800 miles to find a new home in Grand Rapids.

So here they are: opening a bottle shop and tap room concept in downtown Grand Rapids, called Craft Beer Cellar. Jessica and Brian studied intensively with the Craft Beer Cellar flaghship, both earning their Certified Beer Server certificates in the Cicerone program. Jessica continues to pursue her beer studies and is dedicated to geeking out about art, cats, and of course, beer.

Brian is an entrepreneur at heart. As a child he would go through the family basement and put price tags on things to bring to the toy cash register for purchase with play money. As an adult, his first foray into collecting real money was when he built a website to sell his photography. Somehow that led into starting a family business with his brother to sell antique maps and related map themed gifts in Cambridge, Massachusetts. This was a skills-learned-as-needed job, as Steven and Brian pretty much did everything themselves the first few years. Brian took the lead on the responsibilities of building their e-commerce website, managing their dye sublimation production facility, and maintaining their robust IT infrastructure.

After selling maps for 12 years, Brian and his wife Jessica decided to move to Grand Rapids. Brian, with his small business experience, approached Craft Beer Cellar brand about opening a franchise in Beer City. Brian and Jessica spent a few months training in the Belmont shop to take their beer knowledge to the next level. While they had appreciated craft beer for years, they hadn’t critically studied it in detail. Many days were spent on blind tastings, reading beer books and studying for the Cicerone exams. Today Brian is a Certified Beer Server and is studying for the next level, the Certified Cicerone.

Brian has a formal education in Graphic Design, loves cats and is an Eagle Scout. 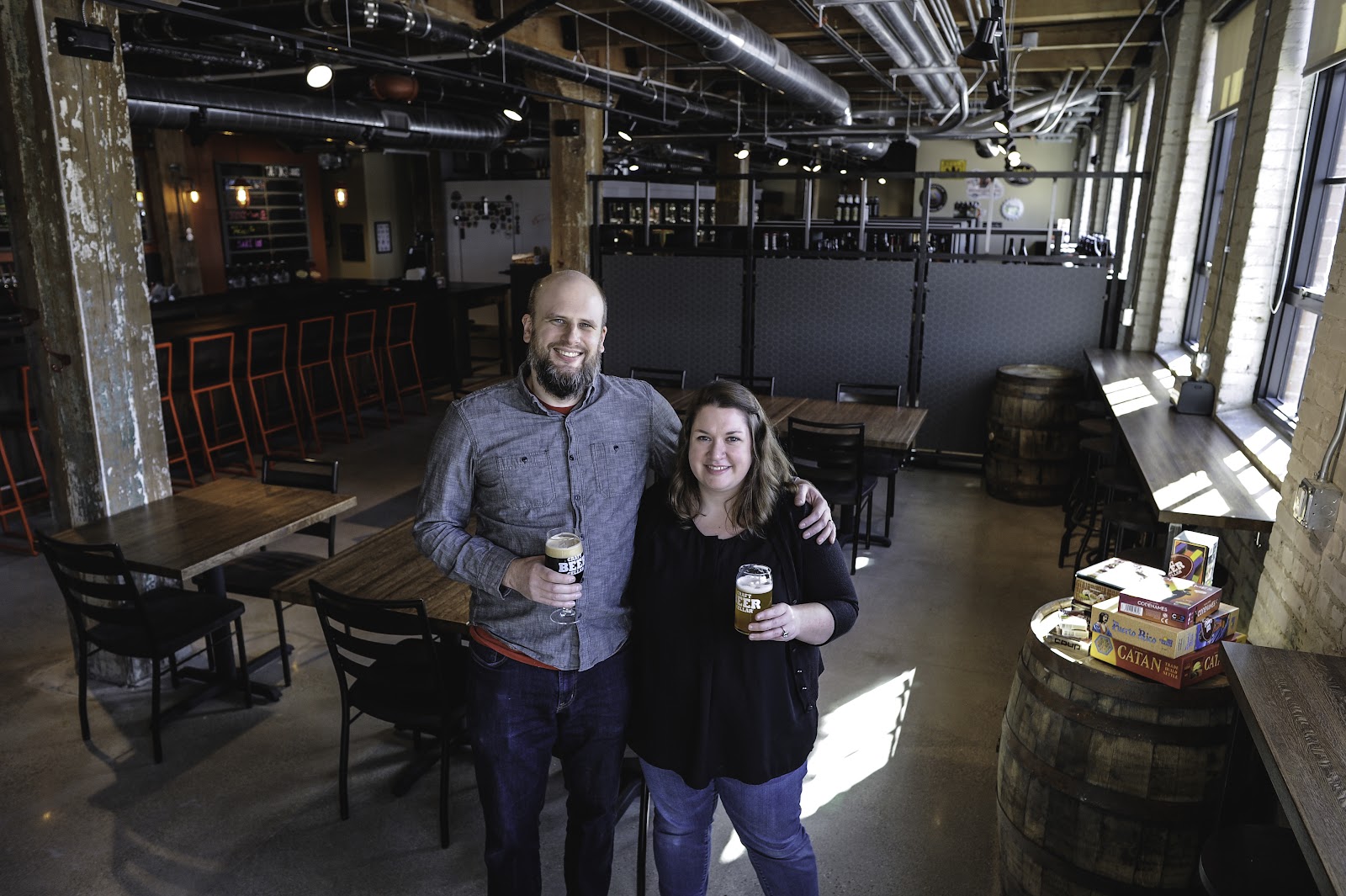 Be 'in the know' in the Craft Beer Community!